Home / Features / THE ITALIAN JOB: THE STORY OF A SICILIAN CITRUS ENTREPRENEUR 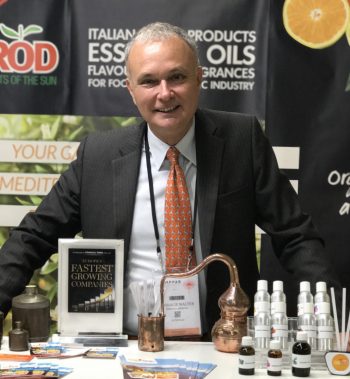 THE ITALIAN JOB: THE STORY OF A SICILIAN CITRUS ENTREPRENEUR

Sicily has always considered itself to be one of the world’s centres of excellence for citrus with generation upon generation going back many years still involved in the local industry, guaranteeing the quality and the reputation of the regions products.

No one is more passionate about the Sicilian citrus industry than Walter Ansorge.

Walter, owner of the multinational Sunprod organisation based in Catania and ranked by the Financial Times (FT) as one of the most successful start- up companies in Europe in the FT’s best performing companies list for the period 2012-2015, has never had it so good. But things have not always been that way.

In a textbook case study of the entrepreneur fighting to overcome seemingly impossible odds Walter Ansorge has been and continues to be, an inspiration to many. Not just in the fruit juice industry but in Italian business circles too.

Here Fruit Juice Focus caught up with Walter to find out more about his irresistible story.

Fruit Juice Focus (FJF): Can you tell us a bit about your personal background in the fruit juice industry and how you came to set up SunProd?

Walter Ansorge (WA): My first experience of the ups and downs in the fortunes of business where when my parents moved from Germany at the beginning of the nineteen-sixties to Sicily to a place called Termini Imerese where I was born and grew up.  My parents had moved to the area on the understanding that they would be getting involved at the early stages of a seaside tourist resort that was planned for the town. This opportunity failed to materialise with my parents being badly let down by misleading advice from local politicians. The planned resort was sited in a highly industrial area where no tourists would be likely to want to relax on holiday and sunbathe and swim.

When I was 19 and studying at university I started working part-time for one of the biggest citrus processors in Europe who were based in the town. This gave me a good grounding and understanding of the fruit juice and oils business. In 1994, at the age of 26, I decided to launch my own company in Palermo, in partnership with several Sicilian business colleagues that I knew in the trade. We built our own juice processing factory, grew our customer base and went from strength to strength over the next 15 years becoming one of the leading companies in Sicily.

In July 2010 disaster struck! We suffered a major big robbery with more than Euro 2 million’s worth of fruit juice, oils and other item stolen from our warehouse. This brought the company near to financial collapse from which it was very difficult to recover. After much soul searching I decided that it was best that I left the company. The robbery was never solved and remained a mystery to this day as to what happened and who was behind it. I was left bankrupt. I had lost all my property and 15 years of hard work were seemingly wasted.

After a period of some months at home, without any financial possibilities, I received a proposal from friends and colleagues in the industry to start up a new company and begin afresh.  Eager to get back into the business I loved, I decided to accept the proposal to start again and with a total capital of Euro7000 used to found the company and to buy one computer and two air tickets to Catania in Sicily at the edge of the famous Etruscan Plain, we were back in business! Sunprod was born.

FJF: What challenges have your company faced, how were you able to overcome them and how has the company grown?

WA: Initially getting credit from the banks and suppliers and purchasing fruit for processing was a major challenge -as it is with any young business. I had a good reputation with growers from when I was running my previous business and with the indirect support of the growers association I was able to get hold of the fruits we needed to get started.

The growers association supported me from the very beginning with a big credit line permitting me to grow much faster than I would have expected especially as we didn’t have access to any bank credit at the time. This, coupled with our great relationships with other businesses and contacts in the market that we had developed over many years, and the extensive globe-trotting I undertook to meet with prospective customers and business partners, has made a significant contribution to our rate of growth.

During the first eight month’s trading as a ‘one-man band’ I was able to close the financial year with Euro 2.2 million billing and a small salary from the profits. In 2012 I had increased turnover to Euro 6 million giving me enough financial resource to take the opportunity to hire young graduates here in Catania. The plan being that with a comprehensive internal training programme on the job, working alongside me with my 30 plus years of experience in the industry, we would grow a much stronger and more competitive organisation. This would enable us to undertake more projects and collaborations with cooperatives both inside and outside of Italy.

This strategy certainly paid off with turnover by 2015 reaching Euro 16 million and by 2016 increasing by a further 25% to a total of Euro 20 million. Sunprod was exporting juices and essences of Sicilian citrus fruits to all the major countries in the world putting us up there among the top companies in Italy in this sector in a very short space of time.

Today Sunprod works with many cooperatives, has five factories in Italy, an office in India, represents a Bolivian citrus company globally and we act as an exclusive agent in Italy for various Turkish, Greek and Spanish processors for whom we also operate as technical consultants.

We are continuing to expand the Sunprod operation and are currently working towards opening a new factory in Venezuela and a negotiating a new cooperative deal with companies in Brazil who are looking to enter the Italian market.

A strong cooperation with a big German essential oil company has enabled Sunprod to increase its shares on the essential oils market which is growing very fast and where Italy still leads the world for quality and bespoke products. The better we can remunerate our growers for the fruits they supply is the key point to guarantee our future and to create a sound trading base.

Sunprod is also one of the biggest sellers in Italy of organic products, a sector in which we believe and invest in heavily.   We are in cooperation with Sicilian universities, to study and control better the pesticides that are used on the fruit crops as the arguments for not using them are growing ever more intense.

In this continuous and fast growing environment, our team is working hard to push our development and growth even further, having more than five years’ experience on the front line. We also owe a great deal of our success to our co-packer, our suppliers and our customers, most of whom are friends and not just commercial partners. Transparency and fairness was from the very beginning our flag for a win-to-win business philosophy and it seems it works!!

FJF: Can you tell us more about the Financial Times recognition of Sunprods success?

WA: Yes of course. The Financial Times (FT) last year undertook a major study of the best growing companies across Europe – 32 countries in all during the period 2012 to 2015 – selecting  from more than 50.000 companies the best 1000 rated by performance data . We were selected as one of a few in Italy and the only one in south Italy. With the unemployment rate in this region standing at around 60% we had made impressive strides by creating in just a few years more than 15 new highly specialized jobs and more and more indirect jobs that work with and for us.  We were ranked in this FT list, in Food & Beverage, as number 33 in Europe, eighth in Italy and first in South Italy.

This gave me a personal high. I was so proud.  This recognition has given us the incentive to go on and on and on. And I would thank all of those who believed in us and believed in my dream despite the setbacks and bad news days that we encountered in those early times

FJF: What about the future for the Sicilian citrus industry, and what about your future?

WA: Sicily and the regions agricultural products still have a very high image in the world and we at Sunprod do our very best to reinforce this view.  Sicilian citrus is still in our opinion the best in the world and all the factories here – although they are my competitors – are doing a great job professionally, backed up with experience developed over many generations in the business. There will be always a place in the citrus sector for Italian products, even if other countries are bigger with much lower costs. Quality is something that has to be paid for and many of our customers in the food industries understand this.

I don’t regret the years of hard work, and still today find myself working a 16 hour day which is quite normal for me. Life gave me a second chance and I grasped the opportunity and am grateful for it.

I am still travelling the globe doing deals, working the markets and promoting the Sunprod brand and collaborations. And I’m still loving it!