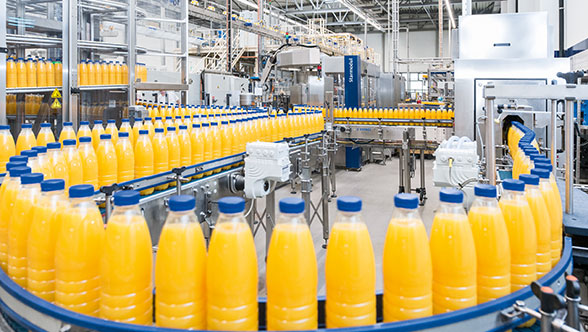 Multi-talented – solution providers for customers along the entire value chain

In addition to milk, Gropper produces juice, smoothies, and bottled water. The company’s spirit of innovation is strong: “When it comes to product development, we are more like a brand manufacturer than a private-label supplier,” says Karl Klein, Managing Director Production and Technology at Gropper. “We don’t wait for our customers to come to us. We approach them proactively with new ideas.” As a result, Gropper has been successfully making organic products for supermarket chains since 2006.

That same year, the company surprised its customers by suggesting they bring smoothies to the German market – long before many of the major brands. In 2009, Gropper began producing NFC juices in PET containers for grocery discounters. “Our latest coup is our own organic mineral water brand, rieser Urwasser. It has given our dairy a foot in the door to one of Germany’s biggest grocery discounters,” Klein says with an unmistakable touch of pride.

Krones became familiar with Gropper’s untiring pursuit of innovation and willingness to take risks back in 2004, when the dairy decided to move into PET packaging. “PET containers make the product visible,” explains Karl Klein. “Bottles made of PET plastic are also very lightweight, fully re-sealable, and hygienically perfect.”

The company had very specific ideas about how its first PET line should be equipped. They wanted to use a two-colour filler with dry-aseptic technology. “It’s the standard in the dairy industry. All of our cup fillers work on that principle. So it was clear that our PET containers and caps would also have to be sanitized in this way,” says Karl Klein.

Since Krones didn’t have that type of filler in its portfolio at the time, the Neutraubling-based company delivered just a Contiform stretch blow-molder and a two-color sleeve labeler that was designed especially for Gropper.

But Krones’ filling technology experts had taken the customer’s idea as inspiration and developed a four-colour filler that uses gaseous hydrogen peroxide to sterilize the containers and caps. And their efforts paid off. In 2005, when Gropper was considering its next investment in a PET line, the company chose this newly developed filler from Krones. “It was still just a prototype – so of course, there were some ups and downs,” recalls Burgmeier.

“When we were looking to add yet another line in 2012, we weighed very carefully whether we should go with Krones again. In the end, though, we realized that Krones had continually improved its dry-aseptic process in the meantime – and so we did. Right now, nobody else on the market can build a dry-aseptic PET line at the same level of quality and reliability.”

Today, PET containers account for about 40% of Gropper’s total production volume. The success of PET packaging is also reflected in the dairy’s capital expenditure. In 2015, the company decided to significantly increase its capacity for producing in PET containers and launched a wave of investment. That same year, Gropper opened a second plant in Stockach, near Lake Constance, which was followed in 2018 by a plant in Moers as part of a joint venture with Dr. Oetker. Two PET lines from Krones are now in operation at each location. In addition, the Bissingen plant also got two new lines, in 2018 and 2019.

Both lines once again feature a PET-Asept D system from Krones, each with a rated capacity of 18,000 1.0-litre containers per hour. This aseptic filler-capper block processes not only milk, dairy drinks, and whipping cream but also coffee beverages, NFC juices, smoothies, and water. The latest filler generation gives Gropper the utmost flexibility in container choice.

On earlier models, changing bottle shape meant replacing handling parts. Today, all container types can be processed with a single set of handling parts. Because the clean room no longer has to be opened, cleaning times are also shorter – and the line’s performance has increased by around 25% compared with earlier models.

With the PET-Asept D, Gropper has once again consciously chosen to keep the filler and the blow-molder separate. One reason is to clearly segregate packaging material storage from the hygienic space around the filler. Preforms and packaging materials are fed into the lines from a central location at the front end of the bottling hall – and for that reason, the Contifeed preform feed system, the Contiform 3 Pro stretch blow-molders, and the packer are all sited in this part of the hall. The filler stands at the opposite end of the hall. An AirCo air conveyor transfers the molded PET containers along the 60-meter (nearly 200-foot) stretch between the two areas. “The air conveyor also serves as a buffer. Especially when working with higher-viscosity products, we can run slow filling without impacting the thermal process in the blow molder,” explains Burgmeier. Klein chuckles, adding, “At Gropper, we’re obsessed with buffers because our experience has been that block set-ups often result in efficiency losses. We really notice that when one of our buffer towers goes down and has to be bypassed. Efficiency immediately drops by four or five percent.”

As a private-label producer, Gropper makes countless different products and brands. In order to meet its customers’ demands, the company has to be able to offer all labeling options. Therefore, both of the new lines include a Solomodul, each of which has two docking stations for wrap-around, pre-cut, and lid labeling stations. The set-up can also accommodate integration of two Autocol labeling stations for self-adhesive labels if needed. If Gropper needs to handle special-shaped bottles on the new lines, a Sleevematic can do the labeling. “We change labels at least five or six times a day. We chose a modular labeler to keep time losses to a minimum,” says Burgmeier.

Gropper has trusted Krones labeling technology ever since they installed their first PET line – and for good reason, as Karl Klein explains: “When it comes to labeling, we’ve never gone with anyone but Krones. Their roots are in labeling and I have the greatest trust in them.” To date, Gropper has also exclusively chosen Krones Contiform stretch blow-molders for bottle production.

The collaboration on PET plastic packaging is just one more milestone in the two companies’ long partnership. “Krones has been a dependable partner to Gropper for more than 30 years. Even though the group has grown to be quite large, we know that we will always have a contact person there who can answer our questions and help solve any problems that arise,” says Burgmeier. Klein adds: “Since the majority of our products are chilled foods, we have to operate 24/7 filling specific orders. Line uptime is essential. Of course, you’ll have an occasional downtime or need a spare part at short notice. At those times, it’s important to have a supplier who will deliver service or spare parts quickly and dependably. Our close proximity to Krones’ headquarters is also a major advantage.”

“Each time we come up with a new project, we have very specific ideas and expectations. Krones listens carefully, takes on our challenges, and does everything in their power to make our expectations reality.”