Apart from in a handful of countries, European fruit juice and nectar (FJN) consumption is showing a decline over the period 2013 to 2016. The most notable country to have bucked the trend is Poland with a steady rise year on year during the period up 19% 2016 against 2013. Hungary (35%), Czech Republic (21%) and Slovakia (26%) are also showing notable increases for this period but from a much lower base.

Juice: 100% pure fruit juice or vegetable juice with no added ingredients, except permitted minerals and vitamins for the purpose of fortification and permitted additives. Includes products: from concentrate, not from concentrate, chilled, ambient, frozen concentrated juice, smoothies. Excludes carbonated juice.

Diluted fruit/vegetable juice and pulp, to which sweetening agents (e.g. sugar, honey, syrups and/or sweeteners) need to be added for the purposes of production. Permitted minerals and vitamins for the purpose of fortification and permitted additives may be added. Whilst juice content is required to be equal to or in excess of 25% by volume, minimum juice content varies according to the fruit in question. Includes products: from concentrate, not from concentrate, chilled, ambient and smoothies.

Largest FJN markets by per capita consumption by region 2016 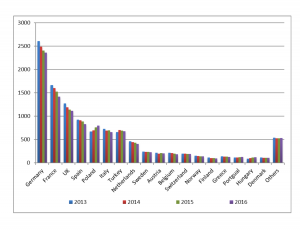 Acknowledgment: This information is sourced from the European Fruit Juice Association (AIJN). The AIJN represents the industry from the fruit processors to the packers of the consumer products. AIJN’s foundation goes back to 1958. The AIJN office is situated in the heart of the Brussels European quarter.